Staffordshire Police have released CCTV footage of a lorry driver making a dangerous manoeuvre on the M6 Toll.

The footage shows the driver performing a U-turn on a slip road on 21 January.

Police said the driver received a six-month jail sentence and was disqualified from driving for 15 months.

Unless you live in a freezer, you’ll know about the heat wave we’re experiencing in the UK at the moment. So I thought I’d write a little about driving in hot weather, the possible issues and how to stay cool!

Air expands in heat! Our safety – and that of other road users – is wholly reliant on the ability and condition of our tyres to perform. Driving in hot weather means high ambient temperatures, hot road surfaces and higher speeds result in higher tyre pressures

Check the tyre mounting and air pressure. Inspect the tires every two hours or every 100 miles when driving in very hot weather.

Don’t let air out or the pressure will be too low when the tyres cool off. If a tyre is too hot to touch, don’t drive until the tyre cools off. Otherwise, the tire may blow out or catch fire.”

It’s always advisable for drivers to carry a tyre pressure gauge anyway. Use this if you are ever unsure.

“Keep your vehicle well ventilated to avoid drowsiness. Be aware that the road surface may become soft or if it rains after a dry spell it may become slippery. These conditions could affect your steering and braking. If you are dazzled by bright sunlight, slow down and if necessary, stop.”

Driving while you are hot will cause you to become dehydrated more quickly. Make sure you take on fluids regularly because dehydration reduces your ability to think and react, and therefore increases the risk you’ll have an accident.

Most vehicles now (fortunately) come with air conditioning. However, some older vehicles (unfortunately) don’t. This means it’s a case of windows open and the ventilation on full blast. Obviously drivers (sunburn) arm is likely to occur here, so either wear a long sleeve top, wear suncream or use your top to just cover your right arm. If it’s any conciliation I have been there and suffered the torment of traffic jams on the M25 for long periods of time in a lorry with no air con!

Hay fever can lead to potential safety issues on roads if not controlled.  If you sneeze at 70mph you lose your vision for as much as 100 metres this can be very dangerous.  Here’s a few tips for you if you are prone to hay fever to help keep safe on the roads this summer:

If you need any advice regarding driving in hot weather or any other advice then just get in touch. Here to share the knowledge!

Project Pictogram a national community wide road safety initiated by Hampshire Fire and Rescue Service and backed by Road Safety GB, seeks to raise awareness of the ‘Fatal Factors’ present in almost all Killed or Serious Injury (KSI) collisions, as well as the more minor shunts which delay journeys and cost businesses every day.
Using simple icons stuck on to the back of commercial vehicles, show other drivers how changing bad habits at the wheel can help reduce accidents. The icons are stuck on the back of commercial vehicles the serve as a reminder to other road users of the ‘Fatal Factors’ present in most Killed or Serious Injury (KSI) collisions. ‘Fatal Factors’ include speed, using a mobile phone, driving under the influence of drugs or alcohol, not wearing a seatbelt and not keeping to safe stopping distances.
Sticker sets cost £2.50 per vehicle to produce from the free artwork files which can be downloaded from www.hantsfire.gov.uk/project-pictogram.

To find out more about Project Pictogram, please click here.

This is a post from FORS regarding mobile phone a consultation to increase the penalty levels for mobile phone use when driving.

Mobile phone use whilst driving is a dangerous activity which increases the risk of a collision. The FORS standard requirement ‘D4 – in-vehicle technology’ specifies that fleet operators shall not cause or permit a driver to use a mobile phone or other distractive in-vehicle technology while driving. Any use of mobile phones and other in-vehicle technology (including hands-free equipment) must be properly managed, and where hands-free equipment is allowed, the terms of its use needs to be covered by a strict policy, ideally supported by a written procedure, risk assessment or method statement. For further information, please revisit the FORS standard.

In support of the Manifesto commitment, the Government published its road safety statement “Working Together to Build a Safer Road System” in December 2015. That statement sets out the context of road safety in Britain today and the overarching scope of road safety activity for the government.

This consultation seeks views on proposals announced in the Statement, namely increasing the penalty levels and Fixed Penalty Notice (FPN) for the offence of using a hand-held mobile phone whilst driving.

This consultation considers proposals for increasing the FPN level from £100 to £150 for all drivers as well as increasing the penalty points from 3 to 4 for non-HGV drivers and from 3 to 6 points for those that hold a Large Goods Vehicle (HGV) licence who commit the offence whilst driving a HGV.

These proposals ultimately aim to reduce the number of deaths and injuries on the roads.

Thought I’d post some pics of a small old trucks gathering. I must admit, I didn’t get chance to get any information as to who this small collective of enthusiasts we’re, as we needed catch a train! Horsted Keynes station is part of the Bluebell Railway which is a beautiful heritage train line running for 11 miles along the border between East and West Sussex. It uses steam trains which operate between Sheffield Park and East Grinstead. It’s the oldest steam-operated passenger railway in the world to operate a public service. The Society ran its first train on 7 August 1960, less than three years after the line was axed as part of Baron Beeching’s report, which essentially saw the loss of over a third of Britain’s lines.

The Station it’s self is just like going back in time in a real literal sense. It’s been restored under a 1930s theme with period newspaper headlines on boards by the buffet and adverts of the period.

Sorry back to the trucks. Well, suffice to say these are awesome examples of restored old trucks and hope you enjoy looking at them as much as I did.

Between 26-31 October, National Lorry Week will see events taking place which the RHA hopes will ensure that the industry and its drivers get the recognition for the essential service they provide.

National Lorry Week events include the RHA hosting a stand at the Conservative Party Conference, so they can hear first-hand about the vital role the industry plays in the British economy, but can also test their potential skills as professional driver on a HGV simulator.

Hauliers will also be asked to display a ‘Love a Lorry’ sticker on their vehicles. A ‘spot the sticker’ competition, with a top prize of £1,000, will coincide with the promotion.

RHA chief executive Richard Burnett said that 85% of everything eaten, worn and bought and used is moved, at some point, on the back of a UK-registered lorry.

“Without us, supermarket shelves would be empty, homes would not be built and manufacturing plants would grind to a halt. This industry employs more than 2.2 million people and, contributes £74.5bn to the UK economy,” he said.

“We have a huge impact on the lives of everyone in Britain but sometimes that positive contribution is overlooked.

“National Lorry Week will provide us with an opportunity to reach out to the public and politicians as never before to highlight our massive and positive contribution to daily life.”

Hauliers across the UK will also be asked to open their doors and invite the public to:

Burnett said: “The British public should be proud of its road haulage industry. It is an industry that works hard, is efficient and innovative. This industry is currently suffering from a massive driver shortage. What better way to highlight the industry as a great career opportunity?”

Next week’s Conservative Party Conference in Manchester (4-7 October) will see the Road Haulage Association (RHA) attending as an exhibitor.

As part of this initiative, the Road Haulage Association will be demonstrating the high skill levels required to drive a heavy goods vehicle and are inviting all visitors to the stand to take part in a ‘Top Gear’ style challenge on a truck simulator. The aim is to beat a score set by the industry’s very own ‘Stig’, Allan Marsh. Allan won the Microlise Driver of the Year competition against a field of over 90,000 drivers using Microlise’s own telematics software and we know that he’ll set a good score. But, as with all competitions, a high score can always be broken.

This forms part of National Lorry Week (26-31 October), aimed at boosting the profile of the industry with the general public, schoolchildren and college leavers, as well as those looking for a change of career.

Everyone is welcome and encouraged to put their driving skills to the test. The Road Haulage Association will be on stand 53 in the conference exhibition area.

The London Collision Map http://www.collisionmap.london uses extensive data, collected by the Police and held by TfL, to shine a light on road collisions in local areas. This creates a useful new way to inform road users about junctions with high collision histories and aiding improvement work in line with TfL’s commitment to improve transparency for customers and stakeholders.

The map allows anyone to easily search for collisions anywhere within London, providing information about when, where and how severe incidents were, which date back to 2005. The aim is to help raise awareness of road conditions and encourage road users to take extra care at junctions.

The report also outlines the Mayor’s new target, set earlier this year, to halve the number of KSIs by 2020 compared to the Government base line – meaning a reduction of more than 14,000 deaths or serious injuries over the life of London’s road safety plan to 2020.

For more info about the other work TfL is carrying out please visit www.tfl.gov.uk/roadsafety 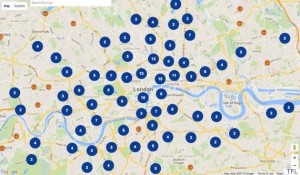 Welcome to TM Consultant. My name is Nick and I’m the founder. My company is about providing professional advice to new and existing operators. This can take the form of External Transport Manager services for Standard National/International operators, ad hock advisory services for Restricted Licence holders, new businesses looking to apply for an Operators Licence and digital marketing services.

One of the main reasons for starting a blog is for those who seek a non jargon answers to the never ending questions relating to Transport Management. It’s a minefield of legislation and red tape out there, and for anyone new to the transport industry can find the whole thing a little daunting. So if you’re a newbie or perhaps you would just like to keep up with the world of transport management then stay tuned!